A series of poor decisions have cost the company millions.

Management is not disclosing the truly dire nature of the business.

Forever Green Worldwide (OTCQB:FVRG) is a micro-cap multi-level marketing firm that sells an assortment of pills and potions that allegedly help with pain relief and weight management. Through a series of poor management decisions and introduction of a costly compensation plan, the company has seen revenues and profits decline sharply in the past year. Top managers suggest the collapse in sales was all planned, in reality the business is on the brink of bankruptcy due to factors the company is not disclosing to investors in a forthright manner.

Multi-level marketers are reliant on one principled business metric that drives sales: Distributors. The fluctuation in distributors, or as ForeverGreen labels them, members, directly correlates with both the top and bottom line. The company confirmed this in the 2014 annual report by noting:

[The] increase in revenues is directly related to the increased number of members and their business.

SG&A among MLM companies is less fixed than traditional retailers and rapidly fluctuates as the distributor bases changes since the largest expenses for any MLM are distributor commissions. In 2016, the company spent $17.1 million, or 42% of revenue on these expenses.

Previously, however, the company spent a much greater amount on commissions to members. That was because, starting in 2014, the company had adopted a new commission structure that highly incentivized recruitment over the sale of actual products to real consumers. In the 2014 10-k the company stated:

During 2014, Company management made a conscious effort to invite and attract significant direct marketing leaders to our Company. This strategy has been hugely successful as evidenced by the convincing increase in revenues.

That conscious effort came in the form of a new marketing plan called FGX. In it, the company authorized massive payouts to individuals with recruiting schemes capable of signing up large swaths of people around the world. In the first year of implementation revenues increased 240% and selling expenses (commissions) increased 280%. The problem was that it squeezed margins are caused the company to post increasingly large losses for 2015 and 2016. 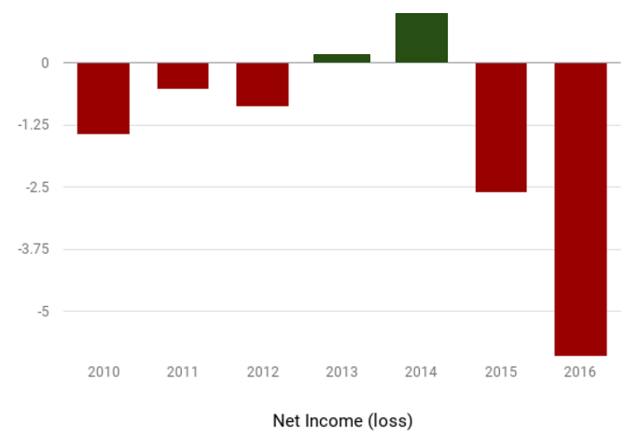 In 2016, with the operating deficit ballooning and financing all but cut off, the company decided to phase out the FGX compensation plan. With less incentive to recruit, many members left the company. Almost half of the company’s members left in 2016 (45.5%), marking the worst year for member retention in recent company history. Unsurprisingly, revenues also cratered, declining 40% that year. Management has not been forthright about why their business is imploding. The massive loss of members is hardly mentioned by management. Instead they explain it as a shift in focus from growth and to profitability. From the 2016 10-k:

During the last couple of years, the Company has focused on top line revenue growth. The Company’s focus has now shifted to driving Company profitability, which in turn will drive shareholder value.

Of course, losing half of your members and nearly half of your sales would negatively impact the bottom line. Investors shouldn’t believe the company’s attempt to explain away the core issue. ForeverGreen is rapidly losing members because they can no longer afford a generous recruiting plan that fed growth over the past several years. With an accumulated deficit of $42.7 million and less than $200,000 of cash on the balance sheet, the company is quickly careening toward complete insolvency.

Fixing the issue isn’t easy and could perhaps be impossible. The company needs to re-invigorate member growth, but does not have the financial resources to do so. Financing is all but gone given the capital position of the balance sheet. The temporary solution for management has been to issue convertible debt which has massively diluted shareholders. With the stock trading for $0.25, more stock can hardly be tolerated by the market.

For years, ForeverGreen has engaged in a bizarre set of financial relationships with various directors and top executives where the company borrows funds at interest rates ranging from 10-16% in order to fund operations. These arrangements, along with the issuance of stock, are the reason the company has managed to avoid bankruptcy thus far. Investors should not hold out hope that these arrangements can continue. If they do stop, the company will have no means to pay its obligations.

This year, the company has $1.7 million of debt coming due. Operating cash flow is negative, the balance sheet has $187,000, and the company has been unable to get financing through traditional lenders. It should not come as a shock that management has finally disclosed that there is substantial doubt regarding their ability to continue as a going concern. Investors should read the tea leaves here and cash out while they can still get some value for what is otherwise a valueless equity waiting for bankruptcy.

Disclosure: I/we have no positions in any stocks mentioned, and no plans to initiate any positions within the next 72 hours.

I wrote this article myself, and it expresses my own opinions. I am not receiving compensation for it (other than from Seeking Alpha). I have no business relationship with any company whose stock is mentioned in this article.

Editor’s Note: This article covers one or more stocks trading at less than $1 per share and/or with less than a $100 million market cap. Please be aware of the risks associated with these stocks.