The FDA is reviewing guidelines of the marketing of health foods.

The new proposals look to include natural foods.

In 2015, the makers of KIND bars were issued a warning by the FDA that the marketing of their products violated the laws on labeling products as “healthy.” KIND, which produces natural and unprocessed fruit and nut bars, responded by telling the FDA its understanding of “healthy” was outdated. The FDA agreed and is now in the process of changing the rules around what food manufacturers can label as healthy.

This news was welcomed by producers of nuts, fruits, and other all natural foods that, under the old rules, had been barred from labeling many vegetable, nut, egg, legume, and fruit products as healthy due to fat or naturally occurring sugar content. Sensing the bad optics of defending mislabeled foods, no producers of highly processed foods/beverages issues a comment to the FDA, except one company, Herbalife (NYSE:HLF). Herbalife was the only company to submit a statement not encouraging the FDA to allow fruits, nuts, and vegetables to be labeled “healthy.” Instead of coming out in support, like dozens of health-conscious brands, Herbalife requested that the FDA delay the rule. Why would a company that purports to be “at the center of a healthy lifestyle” not want to encourage the consumption of fruits and nuts?

As the FDA reviews the term “healthy”, it is also looking at highly processed foods claiming to be healthy and whether those should lose the ability to claim health benefits. Herbalife has taken notice.

Herbalife’s entire marketing strategy involves labeling its products as healthy. Current FDA laws allow Herbalife shakes to be marketed as “healthy” because they contain fiber and protein, with limited amounts of cholesterol and fat. In the 2015-2020 Dietary Guidelines, published by the USDA, highly processed and artificially enhanced foods are discouraged while whole natural and minimally processed foods are encouraged. Herbalife, under new labeling, could have to stop claiming its products are healthy since they contain no whole food ingredients and are highly manufactured. 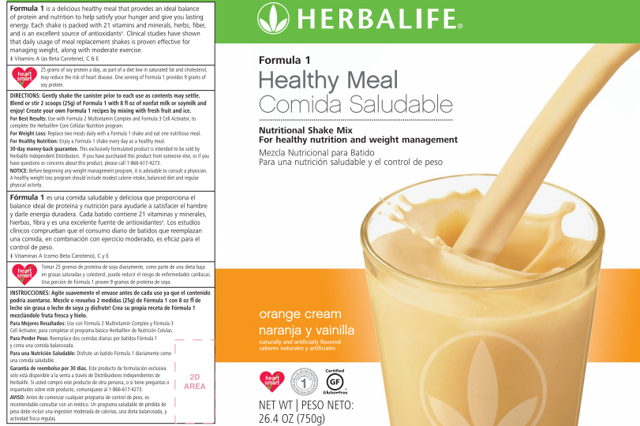 It is hard to find a Herbalife product not marketed as healthy. Herbalife.com is filled with videos trying to convince viewers that the products are “natural sources of protein” and grown “in the seed to feed initiative”, but according to filings, the company buys protein from various chemical manufacturers, including DuPont (NYSE:DD) and BASF (OTCQX:BASFY). 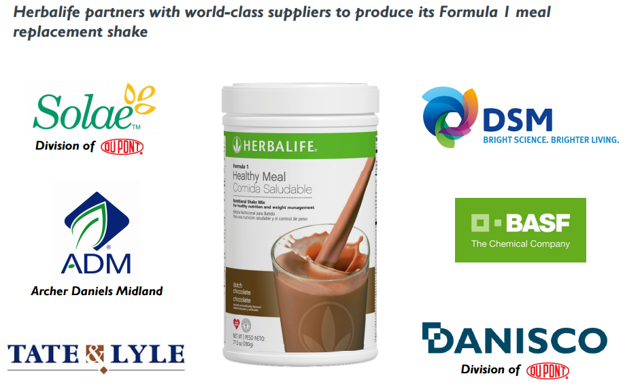 Herbalife marketing currently adheres to two subtexts of the FDA Food Labeling Guide. 21 CFR 101.65(d)(2) dictates the usage of “healthy” to be any food containing low amounts of cholesterol, sodium, and fat while also containing a minimum amount of vitamins. Herbalife products contain little fat or cholesterol, which puts them in compliance with current laws.

Under new proposals (not yet finalized), the FDA will allow foods higher in natural fats (nuts, seeds, olive oils etc.) to be termed “healthy” and will “re-examine” foods that meet healthy standards through artificial enhancement. Herbalife products do not contain a single ingredient that has not been processed significantly from its original form.

What happens when a “nutrition” company can no longer advertise its products as healthy? Ask Coca-Cola (NYSE:KO). When the company purchased Vitaminwater, it was marketed as a “healthy” beverage. After a series of lawsuits, the company was forced to relabel the bottles and stop advertising it as a healthy option due to the high levels of sugar. Vitaminwater has an average of 31 grams of sugar for a 20 fl oz servings. That’s 125% of your daily recommended sugar consumption, according to the World Health Organization. For reference, Herbalife Formula 1 contains 90% of the daily recommended amount of sugar for a 20 fl oz serving. Under new healthy labeling proposals, high sugar content would limit many products from being labeled as healthy.

When Coca-Cola changed the marketing of Vitaminwater, sales slid. After years of substantial growth, the brand saw sales decline in 2012 and each year after. Prior to the lawsuits, Vitaminwater sales topped $700m in 2010. By 2015, sales declined by 27% to $510m. While changing consumer trends, market saturation, and alterations to the product may have all impacted sales, the relabeling of the product that eliminated all usage of the term “healthy” probably had a material effect. 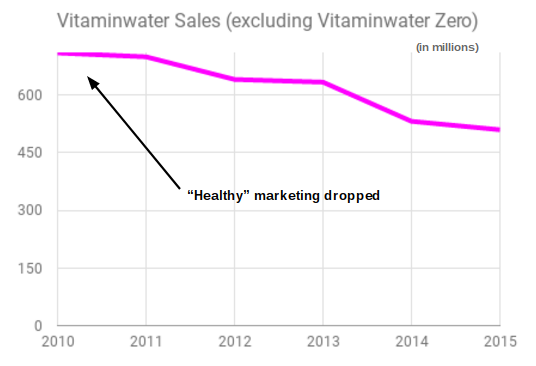 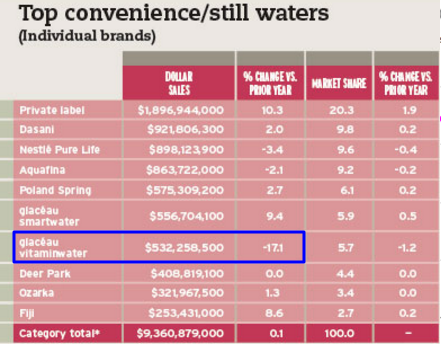 If Herbalife were forced to change its marketing under the newly proposed guidelines, sales could be dramatically impacted, just as was the case for Vitaminwater.

The finalized law will happen sometime prior to the July 2018 deadline mandated under the Food Labeling Modernization Act. The ultimate changes to what can be marketed as “healthy” are still unknown, but the proposals thus far seem to benefit producers of natural and whole foods. Producers of highly processed foods are likely the losers under new standards. That would more appropriately align health labeling with the HHS, FDA, and USDA goals of shifting consumers toward balanced natural diets and away from highly processed foods/supplements.

Without the ability to market its products as healthy (a claim the company has not been able to substantiate with independent clinical studies), Herbalife could see sales decline in a way similar to Vitaminwater. That should alarm investors who are already anticipating sales declines after a series of revenue misses, lower guidance, and a spat of fraud lawsuits. If those problems weren’t enough to convince investors to leave, maybe the potential of losing the ability to market its products as healthy could be the final straw for an already damaged brand.