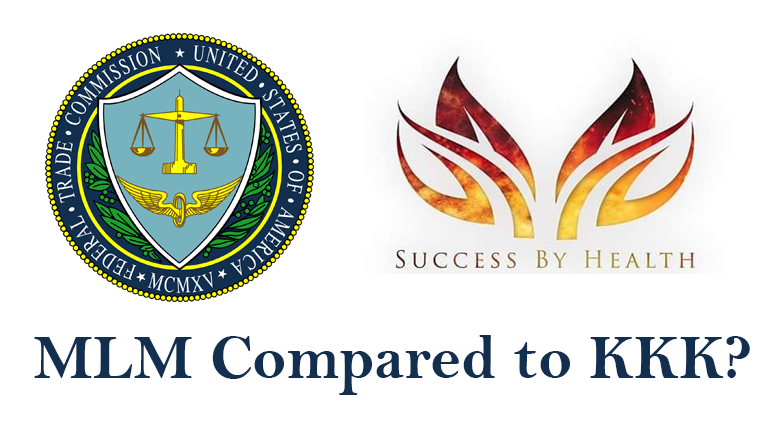 Success by Health Reps who flew in or drove to a courtroom in Arizona in February 2020 were shocked when they SAW first hand a reference used by the FTC Expert Witness in reference to black MLM company owner of Success by Health Jay Noland. Stacie Bosley seems to be the go to Federal Trade Commission witness. As an Associate Professor of Hamline University, she PUBLISHED and article in “Ask The Expert” about MLM.

In that article, there were references to MLM being compared to the KKK.
On cross examination by Success by Health Attorney Mr. Silver, he asked FTC Expert Witness Stacie Bosley why she included references to KKK in an MLM Model. In the transcript, Stacie Bosley stated that people are “intrigued” with the comparison.

The Success by Health representatives are sending their first hand experience on this and these will be included and updated here as they are received.

Were you ever intriqued with a comparison between MLM and the KKK?

What people are Stacie Bosley associating with that find it “intriguing”?
Is there a racial bias of the FTC Expert Witness and should she be used in a hearing of a black company owner?

Comments will be added as they are submitted:

“Coming from an extremely conventional & conservative background as a Senior Vice President of the Pepsi-Cola Company North America with a Wharton MBA, my transition to entrepreneurial endeavors in the MLM Industry was a major paradigm shift.

I have great respect for both large corporate Fortune 500 companies as well as the Direct Sales/MLM industry for what they all provide to workers and consumers alike.

It is almost unconscionable to think that a government agency such as the FTC, charged with protecting consumers in this country, would hire an expert witness in Stacie Bosley who as an academic draws comparisons between the MLM Industry and the Ku Klux Klan.  In 2020 that is a shocking and offensive scenario.”
Robert Mehler

“I was appalled when I saw the interaction of FTC Federal Trade Commission Expert Witness Stacie Bosley being cross examined by Attorney Silver. The fact that in 2020, the FTC would use as an expert someone who said that people find a connection between the KKK and MLM interesting? In a hearing of Jay Noland, a black company owner? The people in the court room were shocked.”
Jo Dee Baer

OUR COMPANY is slowly bleeding to death.
AND where is Innocent until Proven Guilty?

8,000 people lost their livlihoods IMMEDIATELY and nobody cares?

This fledgeling company paid out $2.5 million in commissions to Affiliates out of their profits; Because of the government overreach— They were put out of business?

Every allegation against the defendants, with the expert witnesses of the Plaintiffs Expert has been proven false— and the Government has put these 1,000’s out of work!!”
JM

“I think it’s insulting. I’ve been involved with direct sales for a few years now, and I certainly don’t spread hate. That’s the exact opposite of how we’re trained. I think it’s ridiculous for her to compare direct sales to the KKK.”
Dr. Tyler Sherfield, DPT

When I heard that the FTC’s expert witness, Stacie Bosley, had compared MLM to the KKK, I was initially surprised at the fact. Then I was offended. Although I’m not black myself, I have a lot of multiracial friends that I’m close with and talking about the KKK is not something you do out of respect. MLM is a respected business model that a lot of people have interests in because it helps them physically and financially. To look at the KKK in the same way and compare it to a respected business model doesn’t make sense. This organization has hurt a lot of people and doesn’t deserve the comparison. I don’t know why she would be intrigued by the KKK unless she supports it. ”
Brooke Sherfield

“To make a comparison between the Ku Klux Klan and the multilevel marketing industry like Stacey Bosley did, purely because it “intrigues people”, shows a lack of awareness of the world we live in today and is simply disrespectful.”
Isabel Cabrera

“I was amazed when I heard the FTC expert witness felt that a comparison of the KKK and MLM intrigues people. I’m unsure who she was referring to when she made this statement, but I am certainly not intrigued by the KKK, and I am greatly saddened that someone would the audacity to compare our great industry to such an organization. I thought were much farther along 2020. “
Carleigh Sherfield

As a non-white male, I found it disturbing. Reminding me of all the racism I personally experienced as a child and throughout my school years. I thought that was buried as I became an adult, but the statement made by Stacie Bosley showed me that racism is still very alive, and I saw it first hand at this hearing.

I hope that I don’t have to experience that again, especially during this trying time with Success By Health Vs FTC.”
Carlos Mendoza

“When I found out Dr. Bosley had compared the direct selling industry to the KKK, I was shocked. I found it offensive. Direct selling is how I provide for my family and has helped me spend more time with them. But what really surprised me was her response when they asked her why she had used that comparison. People find it intriguing…? I have never found hate and racism intriguing. It made me curious as to who she believes it intrigues… They say in the business world, talking about something gives it more power. I don’t know… Maybe she has an alterior motive…”
Tevis Sherfield

“Being a young multiracial businesswoman, hearing the comparison of the KKK to MLM business models was absolutely disgusting. Claiming that “the KKK is an intriguing topic” is ridiculous, especially when someone who is not an expert in MLM is the one saying it.

Space and how the universe works is intriguing, the Klu Klux Klan is not and never will be.”
LJ

“My name is Curt Fullerton. As an affiliate with SBH I have and continue to treat this company like its my own. This is why I decided to attend the hearing in Arizona. I work with doctors and have had some success selling the products to them and in turn they have been selling them to patients to help them with nutrition while dealing with severe health issues. When I heard the testimony of the FTC and its witnesses I actually felt I was in the wrong courtroom. I said to a person next to me is this a fictional movie thats being filmed? I have attended all conventions, trainings, and many conference calls the past couple years and disagree 100% with the FTC accusations. I will continue to be on the front lines fighting for our company and what is right. The FTC might be able to take away some of my rights but I will not let them take away my freedom.”