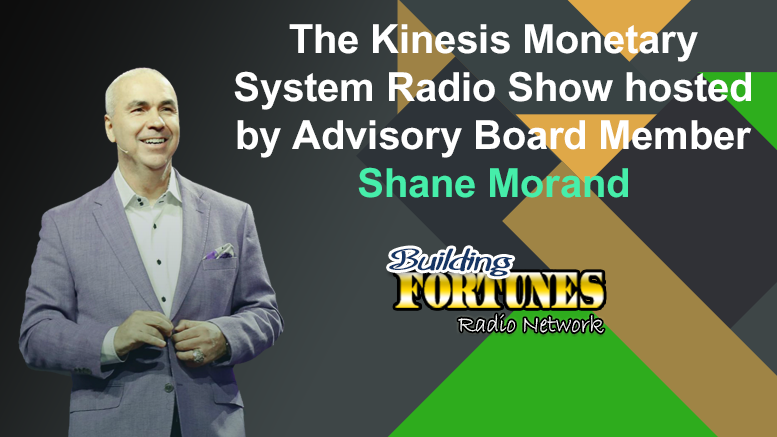 Shane Morand was a guest host with Peter Mingils on Building Fortunes Radio and announced the launch of The Kinesis Monetary System.

You can hear the radio show on Building Fortunes Radio, by clicking here.

Below is from a company Press Release:

Kinesis Monetary System Appoints Shane Morand to Advisory Board London, England — October 1, 2019 — Kinesis Monetary System, the leading gold and silver based monetary system, today announced its appointment of global business leader Shane Morand to its advisory board. Kinesis is redefining how physical bullion is traded and used as a functional digital currency. The Kinesis Monetary System was founded by ABX, the world’s leading electronic exchange for physical precious metals. The new Kinesis referral system will be introduced and launched by Shane on October 15. Sign up for the event, nicknamed “GOLD”, at My.Kinesis.Money to learn how Kinesis is making it possible for people from all over the world – from the ‘un-banked’ to the wealthy – to benefit from physical gold and silver yields for holding, sending, spending and even referring friends to open a free Kinesis account.

Shane Morand is the developer of the “Four Touch System”, a duplicable sales system for entrepreneurs, widely used by the world’s leading consumer brands. As co-founder of a global coffee company, Shane utilized his Four Touch System in the global coffee company he cofounded in 2008, for the company’s sales force training, which resulted in growing the leadership team that produced $1 billion in sales in less than five years and serving over 2.2 million customers in more than 50 countries. Earlier in his career, Shane played a pivotal role in launching the first North American television network dedicated to success – The Success Channel. At ‘The Success Channel’, Shane established life-long relationships with a number of the world’s highest profile motivational speakers, including Anthony Robbins and the late Jim Rohn.

Shane is a Napoleon Hill Foundation honoree, having been singled out for his influence on free enterprise. His experience in working with individuals and entrepreneurs is being recognized as adding significant value to Kinesis and its in-progress expansion. Thomas Coughlin, CEO of Kinesis Money comments “Our distinguished Advisory Board unites global visionaries in the Kinesis Monetary System mission. As the System expands, it will be critical to establish understanding and trust throughout the global consumer base.

Shane Morand has a reputation for efficacy and influence on a global scale and we look forward to a long and prosperous relationship as part of our Advisory Board team and leading the global Kinesis education initiative.” About Kinesis Monetary System Kinesis is a monetary system based on the traditionally stable commodities, gold and silver. With the introduction of the Kinesis Debit Card users can instantly spend their precious metals at point of sale, anywhere in the world. Through the use of blockchain technology, Kinesis is also able to provide cross-border payments with highly competitive transaction fees, making traditional money sending services redundant. Kinesis currencies are based on a 1:1 allocation of physical gold and silver (digital gold and silver), held in real vaults, fully audited, with the legal ownership title remaining with the customer. Thanks to this, Kinesis has reduced counterparty risk and allows for physical redemption of owned bullion direct to your doorstep from one of their seven global best-in-class Kinesis vaulting providers.

Kinesis’ roots run deep in the precious metals and exchange industries, making them privy to a wide array of industry-leading strategic and technical partners. This ensures that safety, quality and reliability sit at the forefront of all their operations. Kinesis Money isn’t just a concept, the product is live and has already opened to its vast preregistered user base. With close to US$10 million dollars in physical gold and silver having been digitized onto the Kinesis system to date. New users can sign up and begin trading via the exchange, storing with zero fees and transferring physical gold and silver, as well as other leading cryptocurrencies. Empowering users to transact globally and more efficiently outside the realm of the current rigid banking infrastructure. Kinesis underwent a significant capital raise, in which it successfully achieved over 90% of its hard-cap target. The unique Kinesis Velocity Tokens (KVT) offered grant holders with a 20% proportionate share of the fees generated by the system, similar to that of dividends. Learn more at: https://kinesis.money