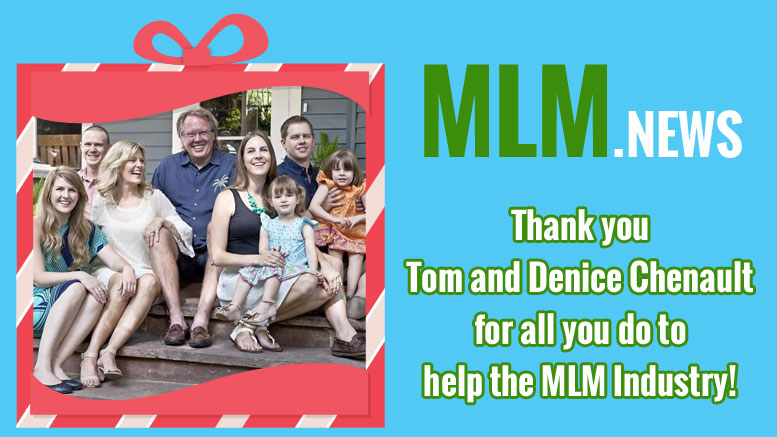 This personal message comes from Peter Mingils, the owner of MLM.news.

Merry Christmas to Tom and Denice Chenault and Family!

Tom and Denice Chenault are a special couple worth recognizing… especially around the Holidays. They both help so many people in their downline, the industry, and the community.

Tom hosts the longest known MLM and Home Based Business radio show.
He is a leading distributor for a well respected network marketing company.
He’s a Dad, a husband, a grandpa, and an overall good guy.
He’s as tough as nails, and as soft as it gets.
If you left your little kids with him, and came home to a mess, you would believe the little ones when they pointed the blame to Tom.

When we were Board Members of the DRA and ANMP, Tom’s smile and cheerfulness is the only way he’s gotten off the hook with me… too many times.

He’s been on the bottom and on the top. His road to his current success is as convoluted as it gets. Denice’s story is as inspiring to listen to as it is tough to imagine going through.

And some how, some way, every day, Tom and Denice work to support the people they work with and the promise this industry has to offer.

Tom’s fun to listen to in person, as he makes Donald Trump sound politically correct… but Tom’s nice and doesn’t get heckled. He’s awkward a bit from stage in a humble way, but he’s great behind the microphone on his radio show.

For those of us who know Tom and his mom, we all felt a loss of a mom when she passed.

Denice does an amazing job as a mom and as a leader. And as a person… OMG, everyone admires Denice. And if you left your little kids with Denice, and came home to a mess, you would still blame Tom.

Individually, they could stand on their own. Together, they form a great couple and a nice example of what success really can mean. Here’s one of his sites: www.tomchenault.com

Success and deep respect was and still is earned… and we at MLM.news wanted to share their example with you.

Tom and Denice, Merry Christmas and Thanks for all you do.