Herbalife has less than a year to prove to the FTC that its US business is based on sales to distributors with Retail Customers who purchase products at prices that generate real profits.

We consider the buying patterns of a small and highly influential group of Herbalife’s top distributors who account for an outsized share of the company’s sales.

By the way, Herbalife would prefer if you didn’t call these top distributors to ask them about how their businesses operate.

Remember those Herbalife (NYSE:HLF) buttons? “Earn What You’re Worth.” It’s time to find out what that really means.

On July 15, the Federal Trade Commission (FTC) imposed new requirements on Herbalife Ltd. and its payment of commissions. In a Stipulated Order for Permanent Injunction and Monetary Judgment, the FTC and Herbalife agreed that after May 2017, Herbalife must principally pay rewards on three types of transactions: (1) sales by a distributor to a Preferred Customer (a distributor who signed up with Herbalife in order to buy the products at a discount for personal consumption but who is not pursuing the business opportunity), (2) sales to Preferred Customers in a distributor’s downline organization, and (3) Profitable Retail Sales by Supervisors in a distributor’s downline to Retail Customers outside the Herbalife distributor network.

In yesterday’s article, we discussed why we think Herbalife will fall short when it comes to Preferred Customers. We looked at a proxy for Preferred Customers and determined that less than 2% of Herbalife’s US sales are attributable to distributors who signed up only to consume the product at a discount.

Now we consider the other 98% – sales to distributors who signed up with Herbalife in order to pursue the business opportunity. What are these distributors doing with the products they purchase? Do the majority resell products to Retail Customers? For Herbalife’s US business to survive the FTC settlement, they have to.

While Herbalife continues to insist that the vast majority of its products end up in the hands of Retail Customers, the FTC disagreed. The agency found little retail demand for Herbalife products and certainly not at resale prices that generate material profits for distributors. The FTC mentioned this several times in its Complaint for Permanent Injunction and Other Equitable Relief, which was filed in Federal Court on July 15, 2016 and publicly released alongside its proposed settlement agreement with Herbalife: 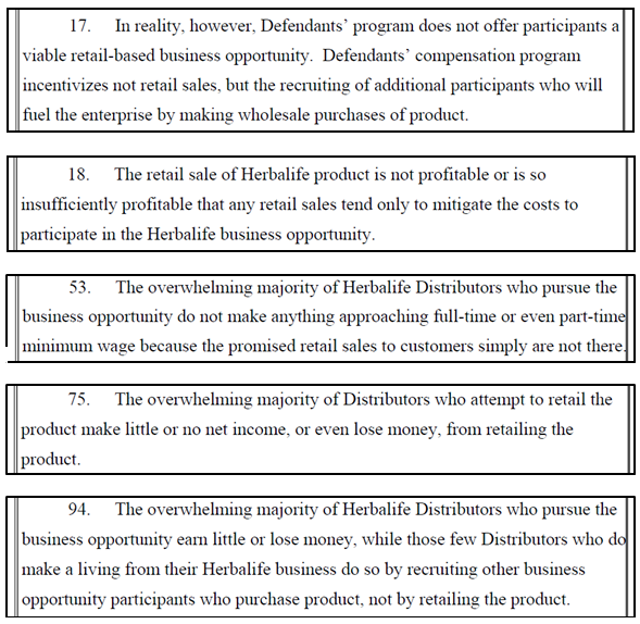 One group of Herbalife distributors is key to answering this question. These are members of the TAB Team and higher, a tiny but influential group. They make up the Millionaire Team, President’s Team, Chairman’s Club and Founder’s Circle and are Herbalife’s highest paid distributors, receiving tens of thousands or even millions of dollars a year in commission and bonus checks.

In our previous article, we used various data sources, including the recent FTC complaint, to determine how much of Herbalife’s US sales can be attributed to purchases by various categories of distributors, including those in the TAB Team or higher:

As the table above shows, “TAB Team or Higher” members account for just 0.7% of all distributors, but as a group purchase 13.5% of Herbalife products sold. We also estimate that these distributors each purchase about 40,000 volume points per year. That’s the equivalent of around 1,670 canisters of Formula 1 a year, or 140 canisters a month.

How can we possibly square this with the FTC’s statements that there is no real retail opportunity for Herbalife products? What in the world are these top distributors doing with the products?

One way to get to the bottom of those questions would be to simply ask top distributors about their businesses. But Herbalife is discouraging this approach.

Here’s a message the company sent to TAB Team members shortly after the FTC settlement was announced: 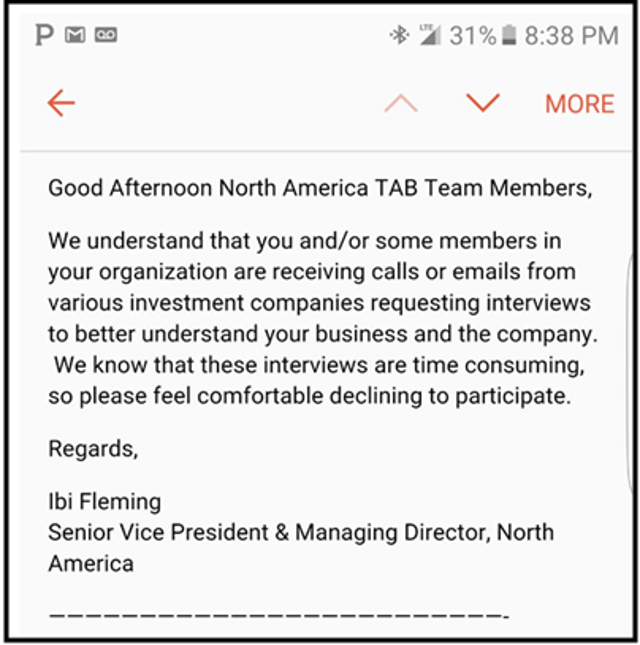 Here’s another message, posted by an influential Herbalife distributor who also runs a business helping Hispanic distributors in the US with accounting and tax issues: 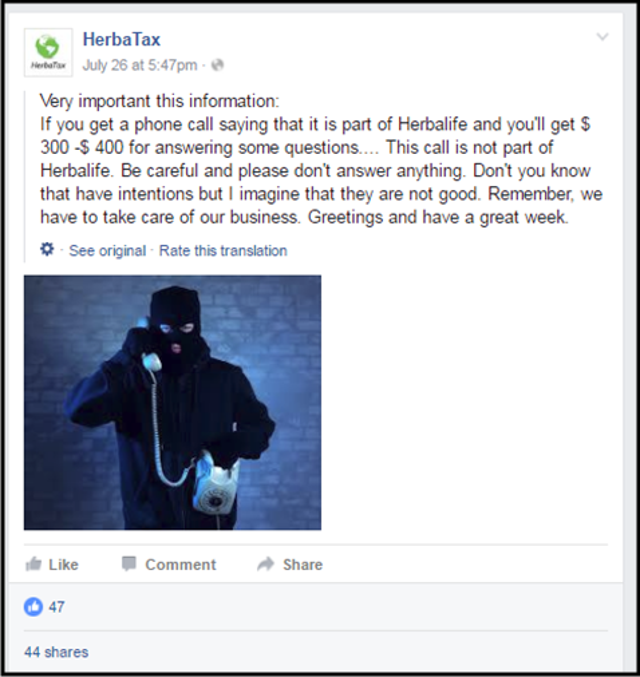 It’s interesting that HerbaTax encourages Herbalife distributors to turn down $300-$400 “for answering some questions,” while the FTC found that half of Sales Leaders average only $5 per year in net profits.

We haven’t tried to reach any of these distributors since the FTC settlement was announced, but based on the above, we suspect trying to interview members of this group won’t be a fruitful exercise.

That doesn’t mean we can’t find clues to how top distributors operate their businesses.

We get a glimpse into how Susan Peterson manages her business in a document filed as part of a legal dispute over assets jointly owned by her and her late ex-husband John Peterson.

According to the document, J&S Vision Marketing has contracted with an administrator to oversee aspects of the business. Among the administrator’s responsibilities is to monitor sales volume and purchase 2,500 volume points of products from Herbalife every month without fail:

Under Herbalife’s compensation plan, distributors need to purchase 2,500 volume points a month in order to qualify for the maximum commission on their downline Supervisors’ purchases. Herbalife also counts purchases made by non-Supervisors immediately underneath the distributor toward this threshold.

We have no idea how many non-Supervisors Susan Peterson has in her organization at any given time, though one would expect there to be many if Peterson continues to actively retail, recruit and teach recruits. One would also, of course, expect Susan Peterson to have developed and maintained a substantial base of her own loyal retail customers over the decades that she’s worked as an Herbalife distributor.

This is qualification buying, and Susan Peterson has outsourced it to an office manager so she doesn’t even have to think about it.

When a distributor sets up multiple accounts, buying product under those accounts and earning commissions, this is known as “stacking.” Each account allows the distributor to reach further down into the pyramid, taking multiple commissions on the massive churn that occurs as people attempt the business opportunity.

Stacking is prohibited under Herbalife’s compensation plan and so is qualification buying. Yet both have clearly been used with impunity by those at the top of the marketing pyramid to qualify for layers of commissions.

Sometimes qualification buying extends to an entire organization, and Korean Chairman’s Club members Tai Ho Kim and Hyun Mo Koo provide us with an excellent example. They are among Herbalife’s most successful distributors and, like Susan Peterson, are members of the exclusive Founder’s Circle.

Herbalife inadvertently revealed some details about Kim’s business in an email sent by an Herbalife executive to the head of the Herbalife Family Foundation, in support of Kim receiving the Foundation’s annual Humanitarian Award in 2013. The email appeared on the Foundation’s website.

In the email, the Herbalife executive tells a story of how Kim’s business, which was generating $500,000 a month in Herbalife commission payments, collapsed after Herbalife’s now late founder Mark Hughes postponed the opening of the Korea market. 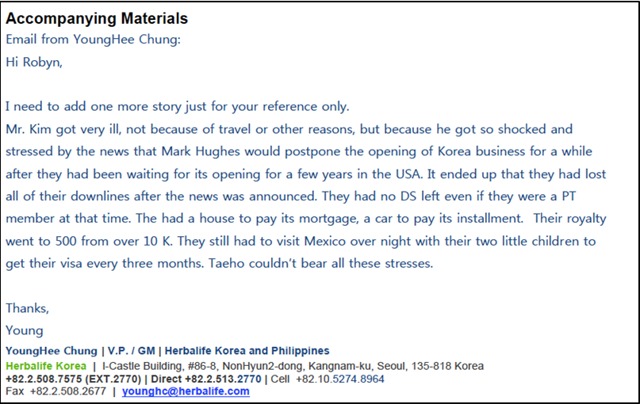 If Kim’s organization had been composed of distributors with actual Retail Customers, his downline would have continued to purchase product even after the news of the delayed market opening. Distributors in his downline might have been disappointed by the loss of recruiting opportunities, but they wouldn’t have stopped buying products from Herbalife altogether. The problem was that their purchases were driven by a desire to reach a high position in the marketing plan ahead of what was expected to be a dramatic expansion in the number of potential recruits in Korea. That’s called qualification buying.

Another one of Herbalife’s most successful distributors is Chairman’s Club member Doran Andry. We get a glimpse into how Andry’s business works thanks to details provided in his ongoing divorce battle in California. Filings in that case include financial information for Andry’s Herbalife distributorship, which is run through a company called HB International Group, Inc.

In 2014, HB International reported $2.6 million in commission and bonus payments from Herbalife. Yet, the business reported just $15,700 in revenue from product sales. It seems that while Andry earned huge commissions on the volume purchased by people recruited into his organization, his own retail business was a disaster.

HB International generated just $15,730.43 by selling products (which we assume to be Herbalife products), while also reporting that it spent $142,557.55, in two separate line items, to buy what we assume are Herbalife products. (We believe F.S.S. stands for Financial Success Systems, another company owned by Andry.) 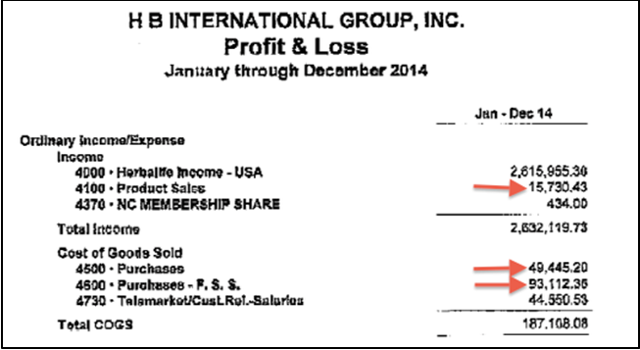 If these goods were in fact Herbalife products, then Andry bought products with a Suggested Retail Price of around $284,000 and made just$15,700 selling them.

What in the world does Andry do with all the products that he doesn’t sell?

We don’t know what Andry’s Herbalife distributorship is storing in all that space, but it sure would hold a lot of unsold Formula 1.

Will Herbalife’s top distributors be able to meet the FTC-imposed thresholds and show that the vast majority of their organization’s purchases are made by Preferred Customers or by distributors with actual Retail Customers? Top distributors have cheated in the past and will surely try in the future. We’ve already heard that some top distributors believe it will be easy enough to use the names of friends and relatives to create fake accounts and to place orders on behalf of these individuals. But going forward there will be an outside monitor reporting to the FTC checking up on them.

As it stands, we believe there is substantial reason to doubt that Herbalife’s most successful distributors will be able to honestly prove they have armies of Retail Customers.

The problem for Herbalife’s top distributors going forward is that fake demand or qualification buying won’t count toward earning commission checks after May 2017. The FTC was quite clear that in order for product purchases to count toward commissions, the products must be sold in “Profitable Retail Sales.” That means distributors must sell to real customers who pay full Retail Price or close to it and provide their names and contact information to the company. Volume that is donated or is part of a standing order, that ends up at a charity or in a storage locker won’t count either.

Combine this with the fact that a deminimis amount of product is being sold to Discount Buyers, and Herbalife is going to have major problems clearing the FTC-imposed hurdle on paying commissions.

In this sense, Herbalife may be right to discourage top distributors from wasting their time taking calls from curious investors. The button may still say: “Earn what you’re worth,” but if Herbalife’s top distributors are going to continue to get the same checks they received in the past, they need to find an awful lot of real Retail Customers and they need to find them soon.