But, as with any great securitized racket like the nonsense “network marketing” industry, there are shills in Congress peddling and lobbying to protect the interests of those who protect their campaigns. 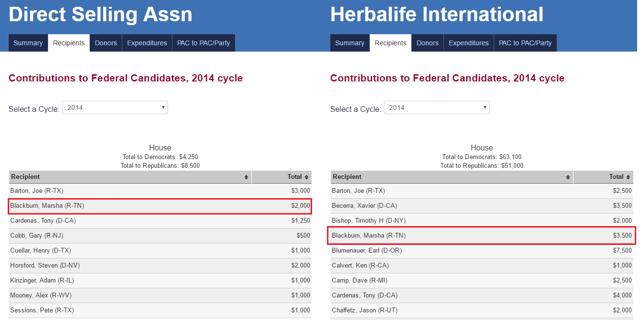 And what do the citizens of the United States of America get from these campaign contributions?

A bill that would essentially legalize predatory pyramid schemes that have already bilked financially unsophisticated investors out of billions of dollars.

Those that push for regulation in this industry include people like Bill Keep, the Dean of the School of Business at The College of New Jersey, who has been astrident critic of the multi-level marketing industry, and Robert Fitzpatrick, author and pyramid scheme expert who frequently pens articles on the pitfalls of an industry based on a mathematic impossibility.

Keep was a co-author with Peter Vander Nat, a senior economist at the FTC, of 2002 and 2014 journal articles on pyramid schemes and multilevel marketing. He also served as an expert witness in the prosecution of pyramid schemes, including Gold Unlimited, brought by the US Department of Justice, and International Heritage, Inc., at the time the largest pyramid scheme prosecuted by the SEC.

The definition of pyramid scheme based on current precedent is simply a company that sells more than 50% of its product during the practice of recruiting new sales people versus selling more than 50% of product as actual retail sales. It’s an easy scale to tip the balance of. Sales of products to people “in network” do not count as retail sales, as they are commonly inventory loading practices that allow members of these companies today receive recruiting rewards (and thus, that easily makes them purchased based on the intent to recruit).

From a mathematical standpoint, it makes sense. Any company that relies more on recruiting than selling of retail products is mathematically an endless chain, and has to collapse at some point.

But appalling new legislation being introduced by donor recipient Marsha Blackburn seeks to pop a loophole in current precedent by introducing a convoluted farcical definition to “ultimate users” – an engineered term that seeks to usurp the most important aspect of determining a pyramid scheme –the amount of sales going to the retail customer. The proposal would allow purchases by distributors (called internal consumption by friends of the industry and just plain “inventory loading” by those with common sense) to be included in retail sales calculations for purposes of distinguishing legal direct sellers from pyramid schemes. If passed, it would legitimize what many critics of the industry regard as a defining attribute of pyramid schemes. Here’s some of the key text from the bill: 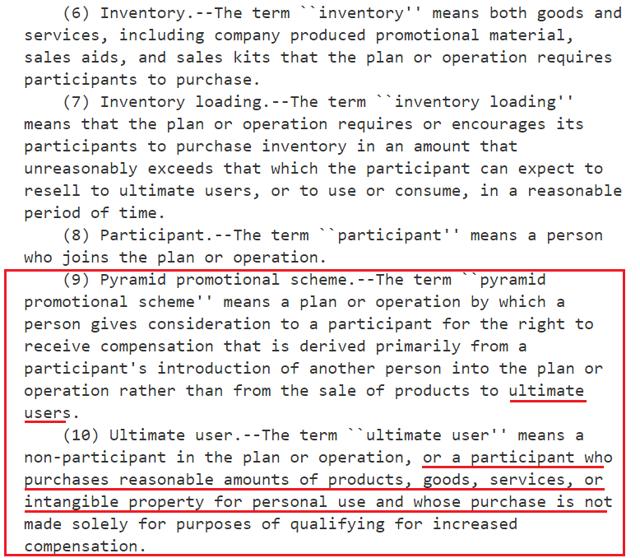 This disgusting new legislation would essentially make pyramid schemes legal. This bill is being deceptively the “Anti-Pyramid Promotion” bill, when in practice, this bill will allow pyramid schemes to be legal in the United States. The lawyers over at Truth in Advertising have already skewered this bill in full. You can read their satirical re-write of the bill in the link in the prior sentence.

This bill is appalling. The way that this bill is titled is disgusting and a disgrace to the United States – it insults the intelligence of every citizen in this country – and should be soundly and swiftly shot down.

Be the first to comment on "Disgusting And Shameful Bill H.R. 5230 Would Legalize Current Pyramid Schemes"