Accenture PLC shares are trading near all time highs.

Consistent earnings and dividend growth have supported the share price.

But valuation is stretched, so is it worth investing in ACN right now?

Accenture PLC (NYSE:ACN) is a multinational professional services firm headquartered in Dublin, Ireland. They provide management consulting as well as technology and outsourcing services to clients. Since 1989, ACN has grown to employ over 373,000 employees, with about 130,000 in India.

And the big footprint doesn’t stop there. The company has clients in more than 200 cities in 55 countries. Clients’ include 94 of the Fortune 100, and 80% of the Fortune 500 (source). With a list like that, and in-depth knowledge of client business processes, ACN probably has a sticky list of customers to fuel future growth.

It’s for these reasons, plus the fact that ACN stock continues to close at all time highs, that I want to take a closer look at the historical financial results of this powerful consulting company. I don’t love to buy stocks at all time highs. But ACN just continues to march higher. So let’s try to learn why. 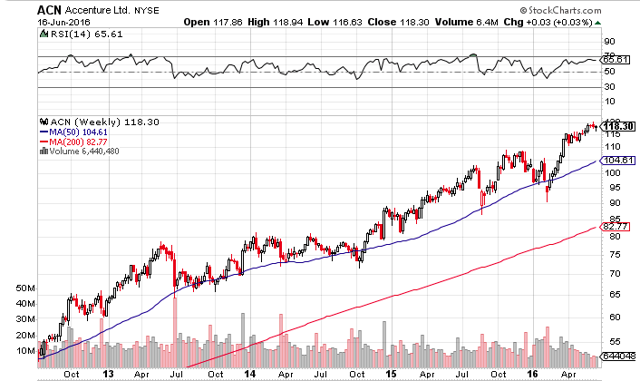 Now given this strong share price performance, let’s take a look at the historical financial results to see if they support the rise in price. We’ll start with the top line.

The revenue growth for ACN is consistently up and to the right, growing from below $20B, to almost $35B. It’s grown consistently over the last 10 years and looks promising on a trailing-twelve month basis as well (source). It’s always encouraging to see a company methodically growing sales. 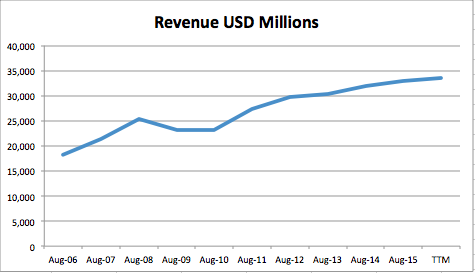 Although things look good overall, one potential warning flag to note is that revenue did fall in 2008-2010. And I think should we see another big recession, however unlikely, ACN is liable to repeat that revenue performance. It’s feasible to me that companies would cut new consulting projects and scale back on vendors as much as possible to conserve cash during times of crisis. So this remains a potential risk.

On the other hand, I’m encouraged by how ACN has grown sales while showing relatively consistent margins over the last 10 years. And this means revenue growth has, for the most part, dropped to the bottom line. Now that you’ve seen the revenue picture, here’s a look at how net income has been growing too. 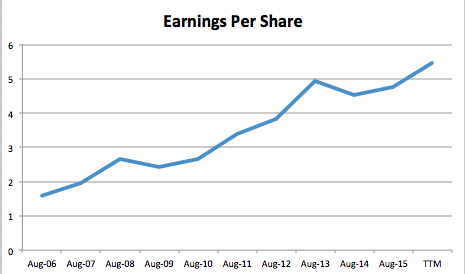 Although earnings declined a little in 2014 and 2015, the trailing-twelve month numbers are promising. And I’ll be very curious to see how this turns out on an annualized basis. So stay tuned.

Another appealing characteristic of ACN is that consistent earnings growth is also benefiting shareholders directly, through share buybacks and growing dividends. The dividend growth rate below is rather impressive, and given the metrics we’ve looked at so far, I expect it to continue. So even though the current yield is shy of 2%, I think the growth record makes it compelling as your yield on cost could get fairly attractive quite quickly. 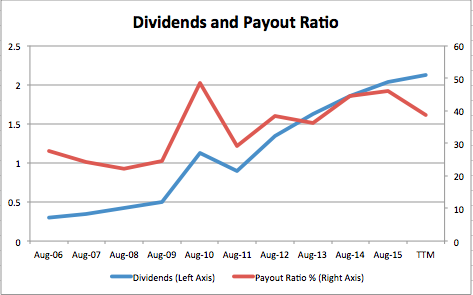 And as I mentioned above, these shareholder returns are augmented by share buybacks. While I’m not always a fan of buybacks, in this case ACN has brought down the share count substantially from 894M to 673M. Have a look: 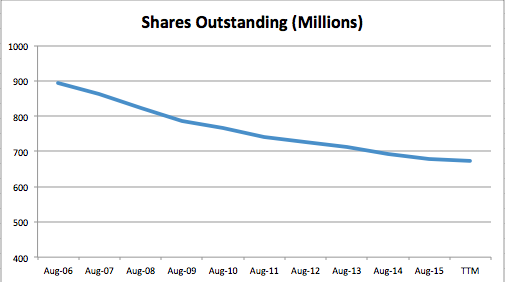 Finally, book value per share has also multiplied over the last ten years. As a long-term equity holder, it’s encouraging to invest in a company that has a track record of growing equity value, rather than diluting shareholders. I’m always happy to see this kind of trend. 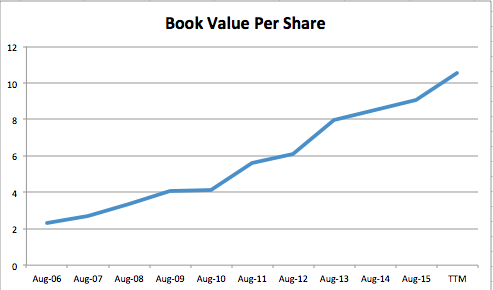 If ACN can continue this growth in equity for the next decade, it’s likely to be a profitable investment. For context, analyst consensus estimates for growth in the next 5 years are 10.1% vs 10.5% over the last five (source).

Finally, I’d like to point out that ACN also has a very clean balance sheet. The liquidity position is rather impressive and it’s unlikely the company will run into any financing or cash flow problems. This always helps me breathe easy.

So is it time to pull the trigger on ACN? Well, unfortunately I think the shares are overvalued, and likely by a pretty wide margin. The biggest example of this I see is the increase in price to cash flow multiples. It’s just kept going up over the last few years.

It’s hard to buy companies trading near all time highs, at high valuations. But maybe that’s just the price of high quality consistent earnings. So while I’m happy for a pullback, I also don’t want to leave money on the sidelines unnecessarily when it could be earning me a return.

And as mentioned before, the only additional risks I’m wary of are slowing global growth among the large-cap clients of ACN. But in my personal opinion, and as shown in the TTM revenue numbers above, that’s not too likely in the immediate term.

Conclusion: Starting a Position in ACN

At the end of the day, I decided to start investing in ACN. I’ve bought an initial position and look forward to adding more on a pullback. So long as the operating metrics and revenue hold up, and I can’t really see why they wouldn’t, then ACN remains an attractive profit generating machine that I want to own a piece of.

As I have a relatively long investment timeframe and regular money coming in, I’m comfortable being a little bit more lenient on entry price than others. So what do you think? Is ACN worth an investment? Or do you foresee risks that I’ve overlooked?

Robert Fitzpatrick on Saturation in MLM

Be the first to comment on "Is Accenture Overvalued Or Worth The Price?"