The public often thinks of bitcoin as anonymous but, in reality, the original cryptocurrency is anything but. The digital ledger keeps every transaction in open view, raising major privacy questions in age of increasing internet surveillance. Just last week, the U.S. Postal Inspection Service, the postal service’s law enforcement wing, published a job listing for “Intelligence Gathering Specialist” with a specialty in identifying bitcoin users.

“Candidates shall be capable of performing a prioritized assessment of the data to identify the most critical and reliable data in order to identify , bitcoins, locations, accounts, services, travels, email addresses, IP addresses and other pattern of life data in an effort to determine physical attribution of an Internet identity,” the job posting read.

Much work has been done on bringing strong anonymity to popular cryptocurrencies including Zcash, a relatively new project described by former Bitcoin Foundation head and security researcher Peter Vessenes as “a giant leap forward” in privacy.

Three University of Illinois researchers published on Monday a new network redesign of bitcoin called Dandelion “which achieves nearly-optimal anonymity guarantees at minimal cost to the network’s utility.” Dandelion, which has not yet been peer-reviewed or deployed, aims for anonymity by mixing messages from different users on a graph that remains hidden from adversaries. The system is named for how messages are spread randomly and ubiquitously over the network, a pattern resembling a dandelion’s seed head (see Figure 4). 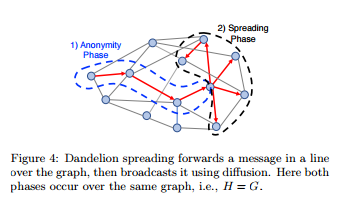 The current market capitalization for all cryptocurrencies is currently $16 billion, over $14 billion of which is in bitcoin, according to CoinMarketCap.com. Much of that has been credited to speculation but there’s no question that a significant percentage is real usage.

Bitcoin’s privacy is widely misunderstood, even among many cybercriminals who rely on anonymity to maintain their freedom. Perusing any dark net forum will reveal a mountain of half-informed conversations with loud arguments about how to launder and privatize the currency. It’s a world ripe with abject guessing about safety and security.

Monero and Zcash, two digital currencies focused expressly on privacy, have markets of $164 million and $20 million respectively. Privacy and anonymity for cryptocurrency always has attracted serious attention both from those looking for obscurity and the government agencies who want the opposite.

Bitcoin is now a Commodity

Cryptocurrency Research Initiative funded for $3 million from US Government

Be the first to comment on "Researchers redesign bitcoin for anonymity as U.S. law enforcement hires specialists"