Shares of cosmetics maker Avon Products (NYSE:AVP) were up 40% last month, according to data from S&P Global Market Intelligence. Avon got a boost from a better-than-expected earnings report early in the month, as you can see from the chart below. 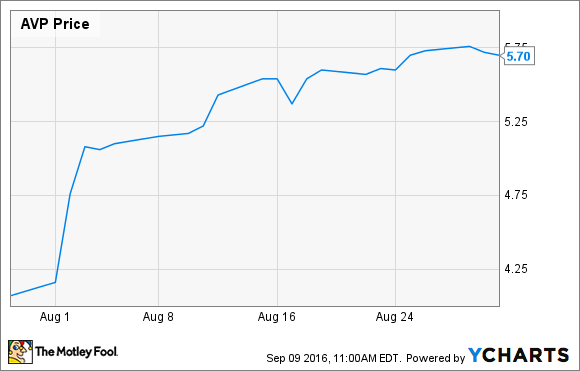 Avon shares have tumbled in recent years as profits have evaporated and the company was forced to sell off its North American business. However, the recent report offered signs that the turnaround plan is gaining traction. Revenue declined 8% to $1.14 billion, but was up 5% on a constant currency basis and excluding the divestiture of Liz Earle.

Adjusted earnings per share fell from $0.09 a year ago to $0.07, though that was better than analyst estimates at $0.02. Avon said foreign currency exchanged impacted EPS by $0.10. CEO Sheri McCoy said that results were slightly better than expectations and that sales grew in nine out of 10 markets in local currency.

Shares of Avon continued to rise after the earnings report, a sign that investor confidence may be on the mend. The company also closed on a new debt offering in the quarter of $500 million at 7.875%, which management said would improve capital structure and financial resiliency.

Avon stock has now more than doubled from its low point at the beginning of the year. The company did not issue guidance, but McCoy sounded optimistic on the future, saying that Avon has made steady progress on a number of fronts, including pricing discipline, reducing expenses, and improving the brand.

While Avon remains a risky play, profits should improve as currency exchange evens out and active representatives grew slightly in the quarter, implying that the fundamentals of the business are improving.

The Case for and Against Avon Products, Inc.

Avon In Talks With Private Equity Firms For Stake Sale

Be the first to comment on "Why Avon Products Inc. Stock Surged 40% Last Month"