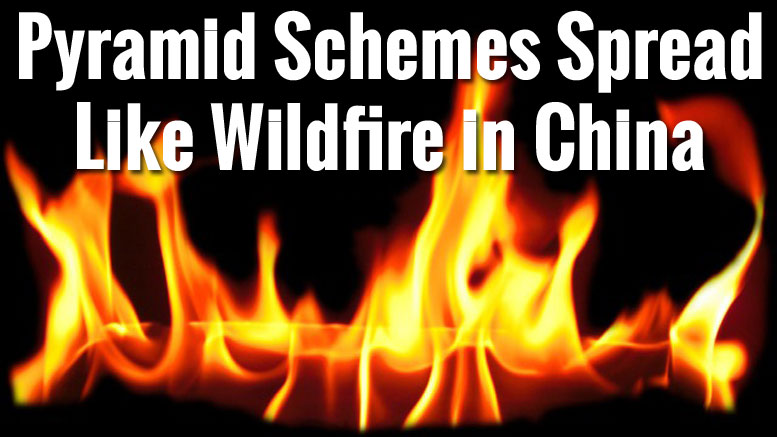 For all too many victims of pyramid schemes, visiting a three-story building in a residential area outside Beijing’s North 4th Ring Road marks a turning point in their lives.

It’s the headquarters of an anti-pyramid scheme association, and according to the association’s founder Li Xu, it comes to the aid of around 2,000 victims each year.

The term “pyramid scheme” strikes fear into many people in China. The schemes rely on new members to keep them going, and beguiled participants attempt to pull in their relatives and friends, sometimes even by deceit and force.

According to media analyses, in 2012 there were over 3,000 pyramid scheme gangs operating in China, involving more than 12 million people. Li’s association has made a map to demonstrate the geographic distribution of these gangs, with over half of China seriously affected.

“Several years ago these schemes were mainly found in southern China, but now central, northern and northeast provinces are also afflicted,” said Li.

For those trapped or detained by gangs, their nightmare ends with the help of police or friends. But for fervent believers who dream of becoming billionaires, they can ruin their lives and the lives of those around them.

Li’s team members have witnessed various forms of pyramid scheme madness. A father severed relations with his daughter and wife, despite his daughter’s kneeling down and begging. People have jumped from buildings, while others have threatened family members so that they could continue their “careers”.

From blind follower to life saver

Once a participant himself, Li knows the painful consequences of the frauds. In 2004, he joined a pyramid scheme gang and climbed to a comparatively high level by recruiting dozens of participants. But the higher his level, the more doubts Li had. He researched pyramid schemes online and eventually realized that his billionaire dream was a fraud.

He then felt deeply regretful. During his obsession he turned against his entire family because they would not “understand” him, and his elder sister had ruined her own family after he induced her to join the scheme. Li could not face himself, nor his acquaintances, due to shame and guilt.

Almost all the volunteers in Li’s association have similar stories.

Pyramid scheme victims are reluctant to disclose information about their activities, so when their families bring them to the association’s headquarters, volunteers pretend to be friends of victims’ relatives in order to build trust.

Volunteers are often cursed or assaulted by the victims they try to help. And when they try to rescue victims from gang locations, the danger escalates. Some are beaten, or even stabbed.

The volunteers receive little payment other than pocket money for food and clothing. They rescue and save victims for free, sometimes even offering them accommodation. As a result, most volunteers work a short time, due to the economic pressure.

But to Li’s dismay, the 2,000 people rescued is trivial compared to the 12 million pyramid scheme participants.

Amway’s Made in America Strategy Doing Well with Asian Customers