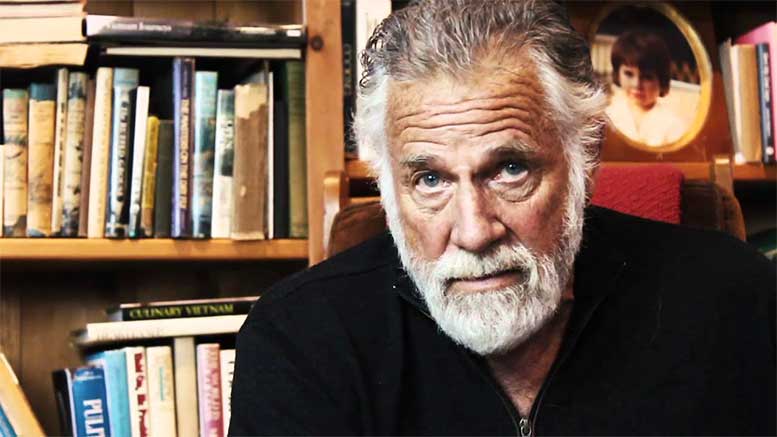 In a recent Forbes Life interview, ‘the most interesting man in the world’, Jonathan Goldsmith, reveals that not only is he a network marketer, but a successful one at that;

“Life doesn’t always imitate art, but when it does, it prefers Jonathan Goldsmith.” So might run a tagline for Mr. Goldsmith, the actor whose own storied career bears uncanny resemblance to that of his most famous character: The Most Interesting Man In The World. The character is the wildly popular spokesman for the Dos Equis beer brand, who signs off every commercial with his own very similar catchphrase. But while Goldsmith’s list of achievements is impressive – everything from saving multiple people from death, to befriending Barack Obama – it encompasses a rags-to-riches-to-rags-to-riches story that’s even more engrossing than his aspirational alter-ego.

“I promise I’m not the most interesting man in the world,” Goldsmith is quick to assure in his husky baritone, “I’m just fortunate enough to play him.”

The modesty is warm and genuine. It is also one of Goldsmith’s defining characteristics, and adds enormously to his “interesting” cachet when set beside Hollywood’s usual narcissism. It’s the result of many years of struggle, success, and loss, and a longevity he attributes to his father. “My father was a teacher” he explains, “and one thing he taught me – one of many, he was my hero – is that a Goldsmith never gives up.”

Starting out as a young actor in the 50′s he made quite a handsome career for himself, racking up hundreds of TV and film appearances, and working with luminaries like Dustin Hoffman (to whom he once said, “The reason you don’t like me is because I’m going to make it and you’re not!”)

But, like the career of every actor – yes, even Hoffman – his began to wind down. “I got older, the hair went gray, it was time for a new crop of actors to take over.” So far, so banal. Things got interesting when Goldsmith got angry.

“I had a rough time accepting it,” he admits. “I was tired of being told I wasn’t tall enough, short enough, too swarthy, too good-looking – I said ‘Bullshit. I’m going to determine what I’m worth.’”

So he quit. After three decades of success on screen, Goldsmith left Hollywood to start his own business, and sit for the first time in the driver’s seat. (And, for those who think quitting isn’t exactly the same as taking the bull by the horns, Goldsmith would agree with you. More on that in a minute.)

He immersed himself in the world of network marketing. His company grew to about 225,000 distributors in 37 countries, and made him “a great deal of money.” How much exactly, he doesn’t say, but it was enough to retire young and purchase a massive estate in the Sierra. “I was going to spend the rest of my life fishing.”

A few of our more entrepreneurial readers will have red flags going up right about now. “Network marketing” is often synonymous with ”scam.” The concept shares much with illegal pyramid schemes, and as they are exempt from many regulations and franchise laws, they are often rife with corruption. Goldsmith is also quick to agree here: “I’m enamored of that kind of marketing. But a lot of scammers do get involved. Donald Trump was once asked what he’d do if he went bankrupt again, and he answered ‘network marketing.’”

(Goldsmith refrains from saying any more about Mr. Trump; he’s come under scrutiny in the past for being public about his political views. One of the downsides to embodying a famous character so completely is that customers have trouble separating the two. When Goldsmith threw a fundraising event for Barack Obama’s 2012 campaign – catalyzing a lasting friendship between the two men – he drew ire from a great number of Dos Equis drinkers.)

While he is passionate about the value of network marketing when done legitimately, his caution about corruption is not unfounded. “My business partner turned out to be…not kosher.” His tenure in network marketing was fated to end the way most do in that field – with a massive lawsuit. “I lost a great deal of money.” The same ‘great deal’ he had made initially? “Yeah.”

So what is an actor-turned-marketing-magnate-turned-lawsuit-casualty to do? Finish what he started, of course. “I decided I had to resurrect my acting career.”

He also owns the less-than-brave reasons for leaving in the first place. “When I quit the [acting] business I felt like I was running away. And while I was building this company, I was still thinking ‘someday I’ll go back, but on my terms.’”

One problem: there was no career left to resurrect. “I’d been out ten years, and out of sight really is out of mind in Hollywood. Nobody knew who I was, nobody would take my calls. I had no money. I was literally sleeping in the back of my pickup truck.”

For those unfamiliar with the fickle nature of the acting world, this gumption alone is a feat in and of itself. Few things are more disheartening than discovering you have no friends in an industry that revolves around them. But it paid off: he finally got a meeting with an agent who knew his older work, and took him on board.

The story of his Dos Equis gig has been covered by other outlets, but the short version is that he was sent on a massive cattle-call audition, which was attended almost exclusively by Latino actors half his age. Shrugging and making the best of it, he improvised his audition, ending with the phrase, “And that’s how I arm wrestled Fidel Castro.” Several months later, after his agent delivered a sound comeback to the director’s chief concern (“How can the most interesting man in the world possibly be only thirty years old?”) he got the job.

The agent and he, incidentally, are now happily married. “I call her The Warden,” he laughs.

This brings us to the present moment, where, after vertiginous rises and precipitous falls, Goldsmith has become a globally recognized paragon of comedy in branding. “I feel like the luckiest guy in the world.”

[A still from one of his commercials, with accompanying voice over text (more at: motivationalpostersonline.blogspot.com/)]

A still from one of his commercials, with accompanying voice over text (more at: motivationalpostersonline.blogspot.com/)

With a foot in both Old Hollywood and the modern entertainment industry, he is uniquely positioned as a brand ambassador, particularly an aspirational character. Dos Equis has said that he isn’t meant to be an embodiment of the brand – he’s “a voluntary spokesman” halfway between Hemingway and Bond, who maintains the view that “life is meant to be lived interestingly.”

The character’s rooting in a fantastical old-world charm and chivalry finds a parallel in Goldsmith’s own take on modern life, particularly when it comes to TV and film.

“Everything today is so formulaic,” he sighs. “There’s not time for development – it’s all absurd, crazy reality shows, and everyone just copies whatever is popular. We’re going to run out of cities soon if we keep making shows about all of their housewives.” He laughs and says that modern Hollywood is afflicted with “The Kardashian syndrome.”

While he does acknowledge that some of the best TV of all time has been produced in the modern era (not to mention his own career-defining commercials), he is genuinely wistful when talking about Old Hollywood. It’s a sentiment that colors the Dos Equis character with a believable sense of history and class.

These lines between fantasy and reality, aspiration and inspiration, history and modernity, all blur when talking with Goldsmith himself. He seems to loathe our ADD-esque media culture, yet much of his success can be traced to the online virality of his commercials – including an incredibly popular (and often very funny) meme, bearing his likeness and catchphrase.

Even beyond the peaks and valleys of his career, his life really does seem to be a laundry list of incredible feats. Many have been reported in other outlets, but a brief tally includes: living on a boat with screen legend Fernando Lamas (upon whom the Most Interesting character is actually based); intercepting Warren Beatty’s lovers; and saving no fewer than three people from death – one from frostbite in a mountaintop blizzard, one from drowning “in front of a thousand people,” and one from suffocating in a collapsed attic. The last one was while he was not yet 10 years old, by the way.

“We are the sum total of our own existence,” he says of the throughline between him and his character. “I have always had a terrible fear of mediocrity, and anonymity.” Fitting words for someone that plays a character who can speak French – in Russian.

However, he stresses it’s not about ego now, even if it used to be. ”The very, very best part of the success that I’ve had is that it gives me a platform to draw attention to foundations that really give something back. I truly resent people who have the brains and a ability to make a difference, but all they do is take. I want to leave – in some way, any way – a better world.”

He is involved in a great number of charities and non-profit foundations. He spent time disarming landmines in Laos with the Mines Advisory Group, taught art and theater in the California prison system, and helps raise funds for many groups that support at-risk youth. Notably, he agreed to be auctioned off as a date at a benefit for Free Arts For Abused Children. He also has a book in the works about his life story, and the value of perseverance and generosity.

“I’ve always tried to be involved with charity,” he explains. When he was young he worked at a summer camp for handicapped children, focused on giving them the experience of being fully-abled (it’s where he learned the rescue techniques to save the drowning girl later in life).

If we are indeed the sum total of our experiences, it’s amazing how little self-aggrandizement his total includes. Now at 76 years old, Goldsmith is quiet, genuinely charming, effusive only when prompted. He understands that if you really want to be interesting, the last thing to do is make a show of it.

He resides now in Vermont, with his wife and their several dogs, and though he will continue to portray the character who made him famous, if it were up to him, he’d still just like to spend the day fishing. He prefers the forest to the spotlight, flannel to tuxes, and after decades of adventures seems to finally be at peace.

“I can still see, I can smell, I can walk. I have a beautiful family. I have lived a very full life, and I feel incredibly fortunate.”

After an early career driven as much by ego as by talent, and a middle career that acted as a karmic signpost, Goldsmith has at last found himself in a place that feels like home. He’s drawn on his humbling experiences to bring a brilliant character to life, and understands that they key to his current success hinges on a generation far removed from his own, at least in the way they digest their media.

“Life is like a parade,” he tells me. “Most people watch it, and experience the vicarious energy. But some participate. That’s my motto. Get in there, man. Life is not a dress rehearsal.”